What Is the Edge? What Are Origin Servers?

Content Delivery Networks may seem complicated at first, but they should be accessible to everyone. As such, it is crucial to understand what CDNs do, and how a network of many servers can effectively increase performance from an origin server. 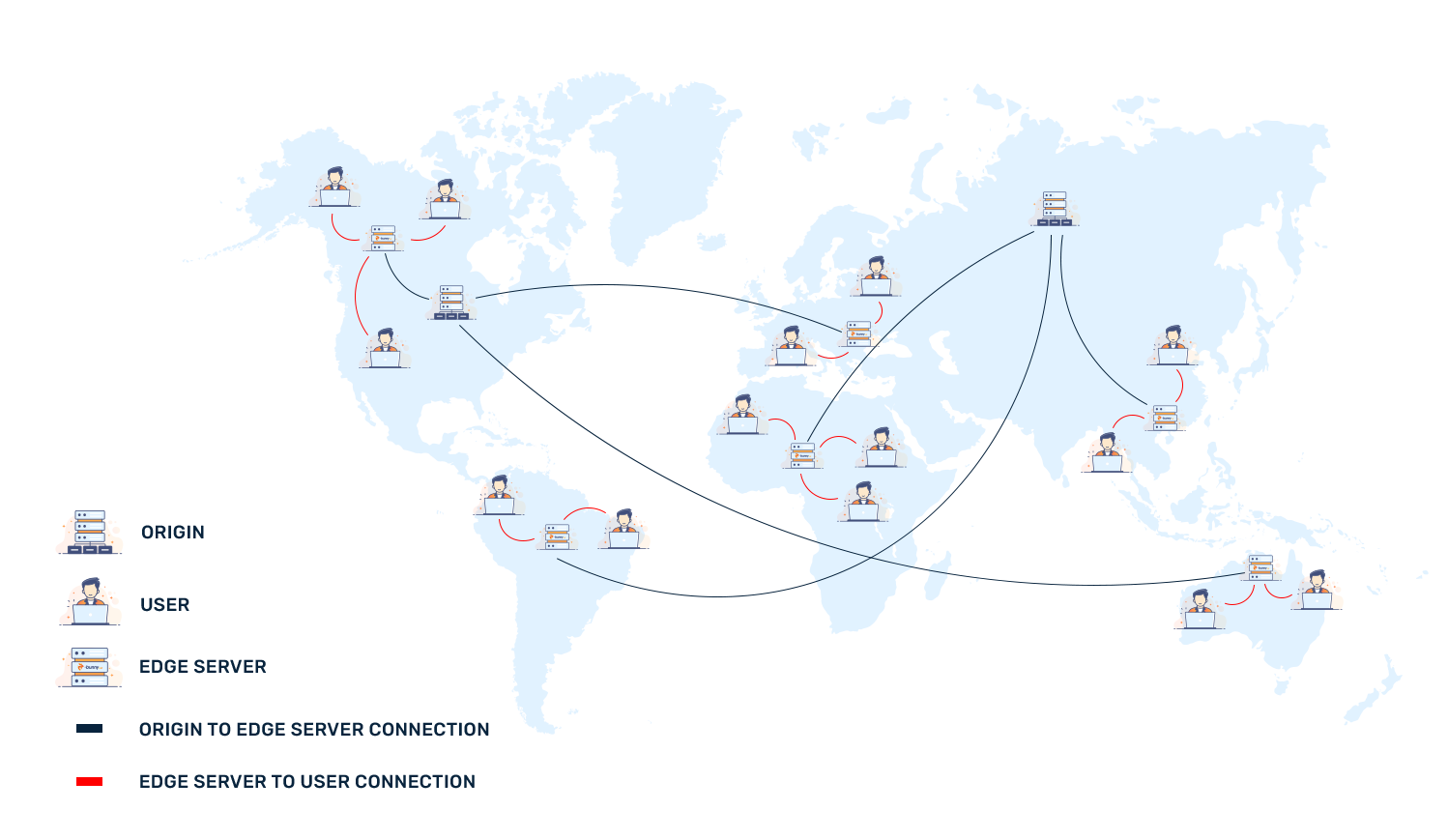 To begin, the word origin is exactly as it sounds: it is where your content originates from. Whether you’re requesting the HTML file to your website, some cat picture or an hour long video, every Content Delivery Network (CDN) in existence will have to pull content from somewhere. This does not need to be a single server either! Some important technologies that are offered to origin servers include failover monitoring and load balancing; the aforementioned features dynamically “switch” your origin servers (where the “edge” communicates) around to manage load or even scheduled downtime on a particular server.

In principle, origin servers don’t have to be a customer’s direct server — it can be a central cache or even other edge servers (in essence, an origin server can be any source for a website’s information).

Once content has been pulled from an origin server, data flows to what is called the “Edge.” The difference between an “origin” an “edge” lies here: origins are often placed in a single location. “Edge servers” are placed globally and content can be cached close to where users are — this in turn lowers subsequent load times for content for an improved user experience. With stale cache and origin IP shielding, CDNs also offer an important feature to webmasters: the ability to remain online, even during force majeure (to an origin) or a DDoS attack.

Note: Locally stored caches on the “edge” are volatile — content that hasn’t been accessed in a while can be replaced with more frequently accessed content (potentially from another customer or user).

One final advantage with globally distributed edge servers (i.e. servers that are around the world, close to users) is resilience. Along with intelligent routing and “anycast” networks, traffic can be spread out and malicious traffic mitigated, protecting the origin from excessive bandwidth costs and improving performance worldwide.

The popularity of “edge” computing has increased in recent years. Users often do not want to pay large amounts of money to run short compute tasks on large servers around the world; in turn, they now have the option to use compute resources close to where users are — on demand — for a fixed price. Lower latency per request (as servers are geographically closer to end-users) increases user satisfaction and powerful edge computing can deliver real-time experiences while avoiding the need to send requests across the globe and back.

One final thing that can be performed on an edge server is running a WAF: whether you want to block XSS attacks or prevent excessive requests, a Web Application Firewall at the edge can continue to provide the low latency users desire while allowing for granular rules to be applied to meet any specific website’s requirements. For example, constant attacks to a WordPress “admin” page can likely be blocked with a single rule — reducing load on an origin (where your WP site is running) and keeping the origin up, allowing for other legitimate traffic to continue through.

An Edge Server is a server used as part of a global CDN or edge network. Usually an Edge Server is just one of hundreds of servers located around the world located in a close proximity to the end user.

A Distributed Denial of Service attack is a category of attacks that target multiple areas on a server.

A CDN, or "Content Delivery Network," is a network of servers (typically placed around the world) used for the purpose of delivering content (videos, photos, CSS, etc..).

Origin servers are "sources" -- content that is sent to the edge (followed by the user) is pulled from an "origin."