Internet Exchange Points, or IXPs for short, can generally be boiled down to an area where multiple networks meet (they operate over BGP). Whether this is done to save costs or to provide better throughput for users, IXPs are crucial to a fast and reliable Internet.

An example could be if a CDN provider serves a lot of bandwidth: it is beneficial to meet at a shared location, where a set of servers can be more directly connected to end-users’ networks (ISPs or Internet Service Providers). Not only does the platform gain from a lower bandwidth costs, users generally receive better experiences when compared to being routed over multiple different networks.

Note: This is not always the case; networks that are directly connected to one another have essentially no "choke-points" aside from the port itself (this is known as a interconnect). Whether any particular network has other private or public peering arrangements, a problem still arises: not being able to optimally connect with every network possible. This is where said IXPs come in -- many networks can connect with each other, at a single point, through a switch (layer 2 on the OSI model).

How do Internet Exchange Points work?

The definition is quite simple — IXPs are (quite literally) a point of exchange. Similar to a series of companies working around the same "room," IXPs are most commonly placed inside of a data-centre (although they can be any place where multiple networks meet): 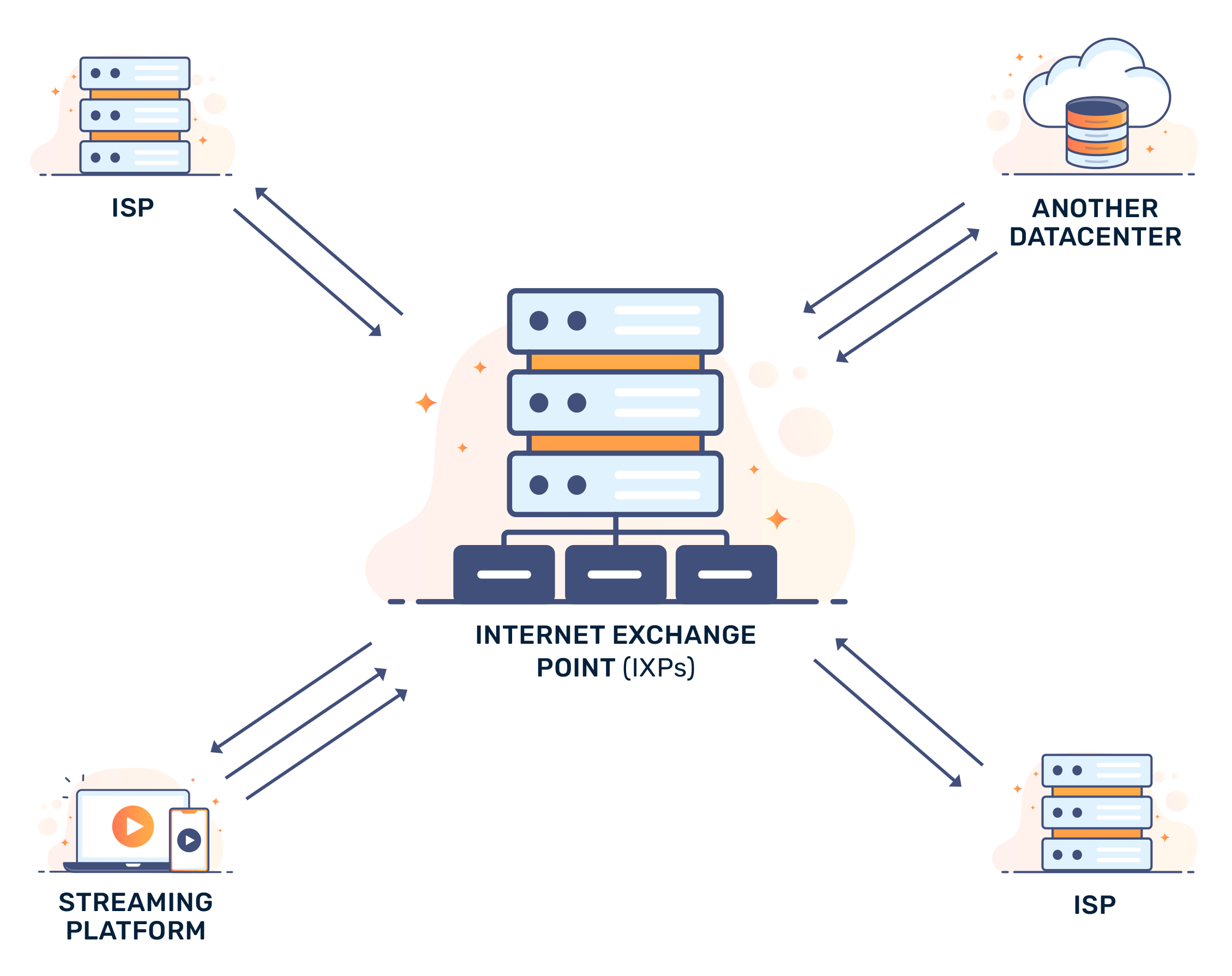 As seen in the example above, a large amount of information is flowing between content or data heavy platforms and consumers within an exchange point. Exchanges operate on the idea that individual networks can control where traffic flows; in the case above, the path between the exchange and any two networks is clearly shorter than that of a route that needs to go over a 3rd party network(s).

In more technical terms, Internet Exchange Points are a series of networks are connected at a central point by some form of switching hardware. Networks connected to an exchange avoid intermediate networks, reducing both potential bottlenecks and latency. Having said that, individual networks can also connect at various bandwidth levels, often set by a variety of factors: from the total number of customers, to predicted traffic levels.

In the end, IXPs exist for one purpose: to join multiple networks (routers) together by a large switching plane. Granular path control at an exchange point allows for the shortest -- most optimal -- path to be taken for traffic destined to another network on the exchange.

While the general concept of an Internet Exchange Point is simple, their benefits cannot be understated. Not only do they save large amounts of bandwidth flowing through other — possibly congested — intermediary networks, they are both fundamental and essential to the smooth operation of a reliable and open Internet.

ISPs, or Internet Service Providers, usually serve "end-users" or customers -- they bring all customer traffic to peering points and IXPs.

An IP address refers to a specific and unique location on the Internet. The two current standards are: IPv4 and IPv6.

IXP refers to an Internet Exchange Point; this generally refers to a single location where multiple networks meet.